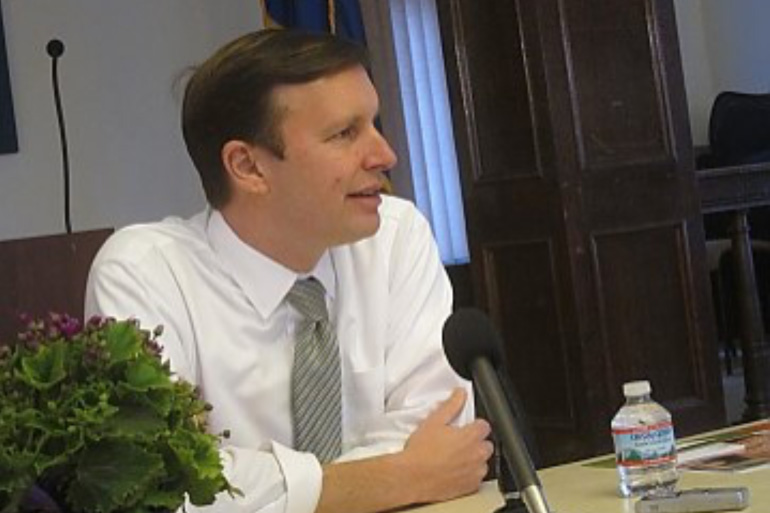 On Monday, March 28, Senator Chris Murphy stopped at The Connection’s 48 Howe Street facility in New Haven to meet with clients of The Connection’s addiction recovery programs, which include Recovery House and Elm City Women and Children’s Center in New Haven, Hallie House in Middletown, and Mother’s Retreat in Groton. His visit was part of a five-city, statewide tour to gather information about heroin addiction, which claimed the lives of 415 people in Connecticut last year.

“We have an epidemic in this country and we are closing our eyes to it by failing to provide emergency funding,” Murphy said. “We spent (an estimated) $4 billion making sure that Ebola didn’t become an epidemic in the United States. We’re living in an epidemic of heroin deaths and we won’t appropriate a single dime for it.”

One of the people who spoke at the meeting was Trish, a graduate of The Connection’s Mother’s Retreat program, a long-term, residential treatment facility for pregnant and parenting women working toward living a clean and sober life. Trish had used heroin for more than 15 years, starting at age 15. Now 38, she has been sober for over seven years. For the past six years, Trish has worked as a house manager for a substance abuse treatment facility in another part of the state and finds considerable fulfillment in helping and inspiring others to overcome their addictions.

To read more about Senator Murphy’s visit and The Connection stories he gathered, please read on at: The New Haven Register, New Haven Independent, and Hartford Courant.